Moles are remarkable animals that are well adapted for their life of digging below ground.  Moles are seldom seen by humans, but often come into conflict with homeowners when they burrow in yards.  The mole is the only animal which will create a surface tunnel.

Moles lack external ears and have tiny eyes concealed beneath their fur. Their front feet are wider than they are long, webbed toes support strong claws and their palms turn outward, creating paddle-like forelimbs that move laterally, enabling moles to ‘swim” through the soil.  Moles have short velvet-like fur that varies in color from gray to brown. A fully grown mole is 4 to 6 inches long, not including its short tail. Adults weigh 3 to 5 ounces.  In our area the species most commonly encountered is the eastern mole (Scalopus aquaticus).

Moles have voracious appetites and are nearly insatiable. Moles feed almost exclusively on insects and earthworms.  No more than 3 to 5 moles live on an acre and 2 to 3 is a more common number.  Moles live for 3 to 4 years in the wild.  Predators like fox, skunk, owl and even dogs and cats, kill and eat moles.  One method of mole control might be to get a dog or cat.

No matter what you have heard, controlling grub populations will not eliminate moles.  Grubs make up only a small portion of a moles diet – earthworms are a moles primary food source.  Trapping is the most effective and practical means for controlling moles.  There are several traps on the market.For more information on moles and trapping, please see the following websites:

For more information on mole removal and control services, please see the the linked document: 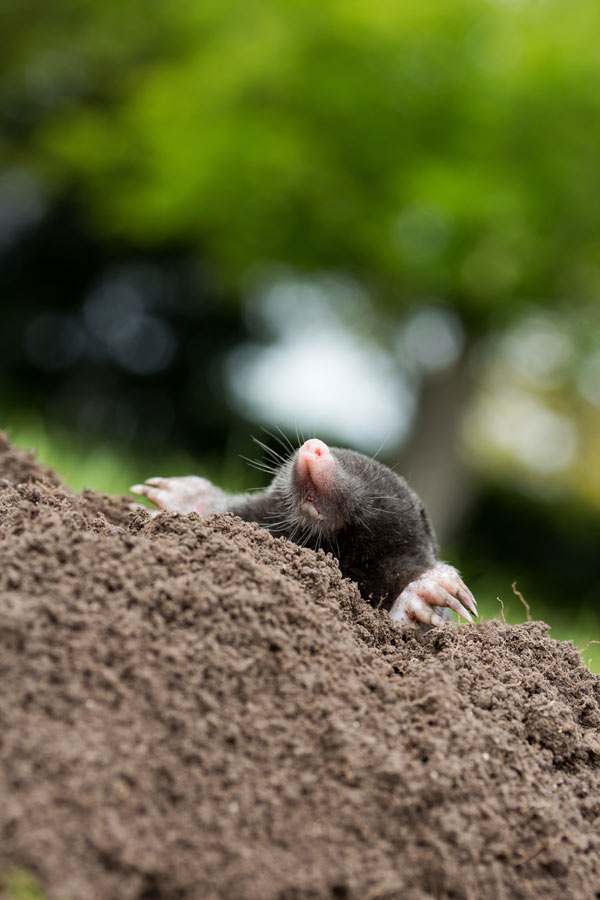 Call or Email for Your FREE ESTIMATE